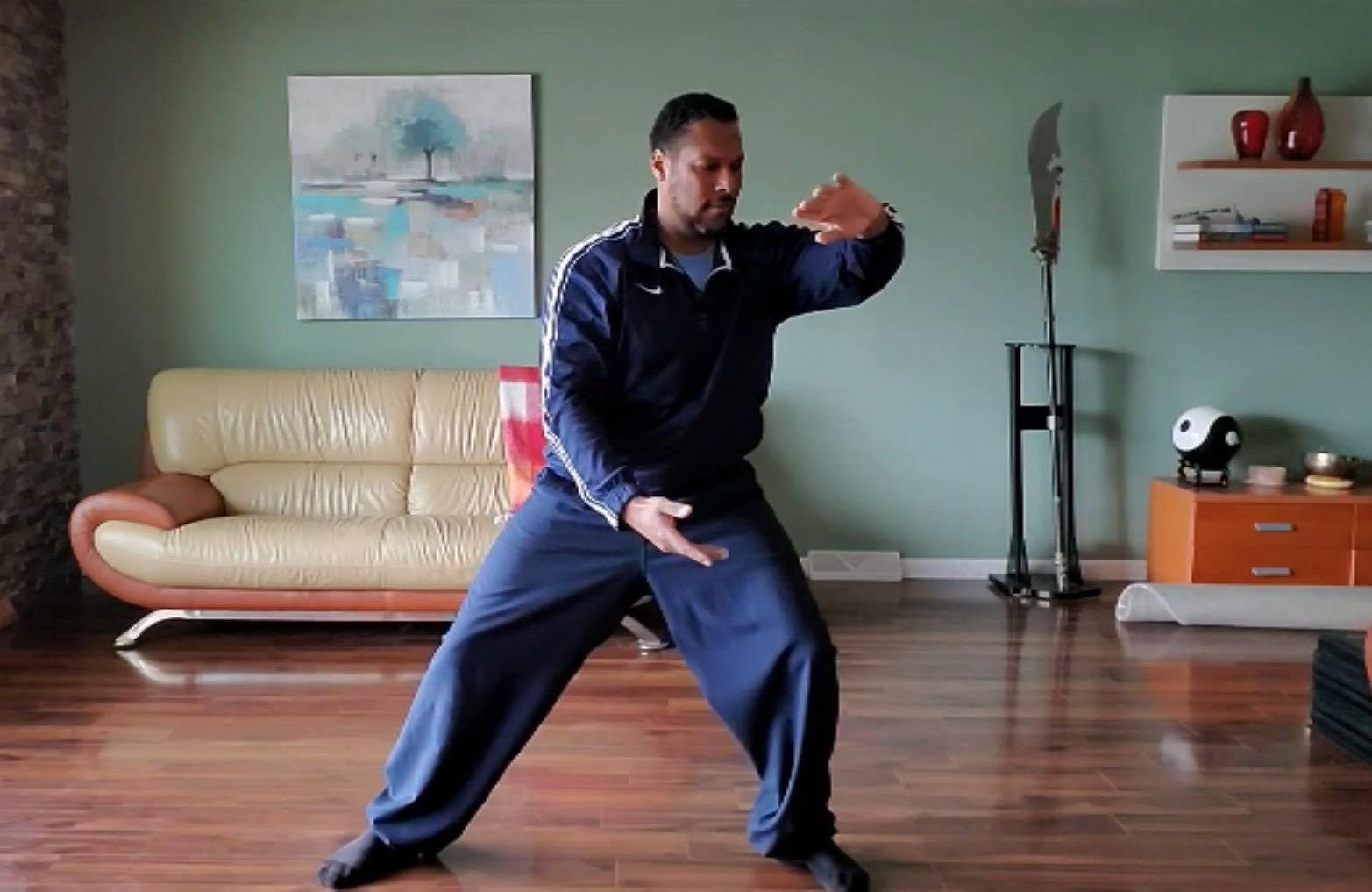 My first experience with Silk Reeling came from Master Tony Wong’s group in San Francisco. Milena and I went out to meet and train with him several years back. Tony teaches in several cities in the Bay area, San Francisco, Daly City and San Mateo to name a couple. Our first day he told us to meet him in his San Francisco class at 8:00 a.m. We were there early and eager to see what his class would be like. It was a huge class. The people accumulated one by one and conversed as they strecthed and did waist rotations. One of his senior students pulled the group together and began the silk reeling exercises while we waited for Tony to arrive.

We lined up in rows and spaced ourselves out. We started working with the neck and worked our way down to the ankles and feet. With joint rotations and deep breathing exercises that took nearly an hour to complete. As I stood amidst the other practitioners I remember a great feeling of belonging. I was a part of something healthy, something ancient that had been passed down through generations, something that led to a better way of life, a better way of movement, something that gave control and freedom at the same time.

What is silk reeling energy? Well, I have never reeled silk, actual silk, but I have heard that do so you must not pull the silk too quickly or it will break nor must you pull too slowly or it will bundle together. It must be done smoothly, evenly and continuously. When you learn silk reeling exercise this is the feeling as the energy is directed from the ground through the feet and legs, through the Kwa, the Dan Tien and out the desired extremity or pathway. As I stated we started with the neck and worked our way down through all the major joints of the body. To explain the process as it pertains to every joint would be time consuming and redundant. I would like to take a look at one joint in particular to give an example of silk reeling.

Under the not so hot San Francisco sun in the early morning we had worked the neck and spine doing our three deep breaths in between each section. Now we were working the shoulder. The senior student went from exercise to exercise without a word, everyone just followed along in sync. We stood in a bow stance or forward stance common to Tai Chi with one hand on the waist and our other hand formed a fist which circled the chest. We made full vertical circles in the air with our elbows, thus rotating the shoulder joints. What was interesting is that although we were isolating the shoulder I noticed that everyone moved their whole body. So I tried my best to mimick their movements. As the elbow rotated forward the weight shifted to the front leg and as it went up and backward the weight shifted back. As I did the movements I also noticed the waist was turning but what I didn’t realize at the time was that their movements were generated by the legs through the Kwa. What I did notice was the whole body was used no matter which joint we were exercising and the legs were feeling the effects of the low stances. The ankles and knees were moving, the waist, the shoulders, elbows and wrists. If somebody would have stopped and told me that not only was I strengthening my legs I was also lubricating all my joints and massaging my organs as well as deeping my respiratory functions, well I certainly would have believed them! If they would have told me that I was learning how to deliver massive power by using the earth itself, well I may have believed them but it would take me years of self discover to figure out exactly how. Or should I say to “feel” exactly how. Alot of times our minds can conceptualize the process of things and even have a surface understanding of how things work but only after time and effort will we really feel these things and gain a true deeper understanding.

I have travelled to San Fran on several occasions to study with Master Wong and each time I gain a little more understanding. After the first few visits I could not recall all of the silk reeling set but I would practice what I could remember. I knew to start with the head and work my way down. I was missing some of the moves but after so many visits I now remember all of the movements. I had looked on youtube at other silk reeling sets but none were as extensive or similar in fashion to Tony’s. It was about a couple years ago I was practicing in the park and I truly felt the depth of silk reeling. Previously I would “sit” in a nice low stance and let my waist guide the movements, the arms would float and rotate effortless, it was graceful it was satisfying it was fun but it was not complete. I remember that day in the park I was doing an exercise that resembled cloud hands. I pushed my right foot into the ground to turn the body left, I felt it travel up my leg into the right Kwa and across to the left, the Dan Tien led the way, then it spiraled out to the arm. It was power, relaxed but strong. From the earth through my body and out the arm. Without stopping I rotated the arms and went from left to right, the same thing happened. I smiled inside, I knew I had a breakthrough. I thought I was doing it right all along, well actually I was doing it right on the level that I was at. Like all things there are levels that we must dig to reach. Obviously I had dug. As I continued through the exercises I kept this feeling and used it to generate all movement from foot to finger, from foot to elbow, from foot to wrist, then shoulder. I couldn’t get enough of this feeling.

The silk reeling has helped with the expression of my forms as well as push hands. Imagine being able to unite the body letting the power spiral up and out from the ground and out into your opponent. Or if you are recieving force what if you could control each joint, either yielding each one at will, letting the energy dissolve at that point or if you so choose you can use all the joints in succession acting as one to root or neutralize.

Today I teach silk reeling and I try to explain it as best as I can. But it will take each person on their own journey time and effort to truly experience it. Before when I was doing the exercises even though I was in a low stance I was not relaxing into the Kwa, I was not sinking into the Kwa. No matter how low you go if this does not happen you will miss an integral part of the formula in the power train. The key word here is Song or Sung, no matter how you spell it. Years later even as I begin to feel a deeper level still in my silk reeling, a bit more internal, I know there are more levels to dig to. Most can understand this but until you truly feel it it will merely be a concept that you understand.

I found that there are other methods and principles taught that are very similar to Silk Reeling although they may have different names. Sifu Lester Holmes teaches Mother Forms which are similar in nature. Lewis Palaeis of YMAA teaches YinYang symbol training that also is very similar in effect. I’m sure there are many many more people and methods. I am naming these two beacause I have been lucky enough to have them share with me. Many forms of Qigong unite the body and mind, they also unite the body parts into a whole. Silk reeling does this and more, as I continue to learn and grow I am looking forward to see how deep this journey goes.

If you are practicing Chan Su Jing (chansuching) or Silk Reeling I urge you to always reach for the real of it. Do not be satisfied with surface appearance, dig deep and feel it.