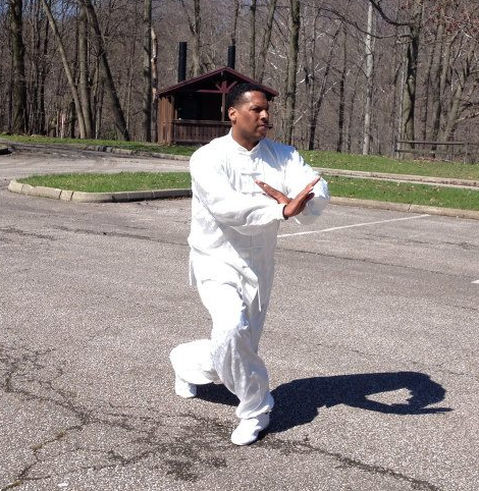 Tai Chi consists of the 13 postures, five stepping and eight energies.  The eight energies are Peng, Lui, Ji, An, Cai, Lie, Zhou, and Kao or Ward Off, Rollback, Press, Settle the Wrists (oftimes translated as Push), Pluck, Rend (seperate), Elbow, Bump, as translated in English. All of the techniques in Tai Chi can be categorized under one of these energies. Of the eight energies the first listed is Peng (Pong) or Ward Off.  Peng is described as a rising and expanding energy. It is often referred to as the air inside a ballon that gives the ballon it’s shape, it presses outward in all directions.  The first move after stepping from Wuji is beginning form or commence form where the arms float up led by the back of the wrists. This move should have Peng or Ward Off energy. Ward Off in the form is another such move, obviously. How many more moves in the form should posess Peng energy? Oh, just about all of them.  Although Tai Chi is a relaxed art, is not exactly a soft art.  It is referred to as a soft art but this is a misconception. In Tai Chi we yield and re-direct but we do not collapse our form or structure. The skills in Tai Chi are often called “steel wrapped in cotton” the outer seems soft because of relaxation and flow but the core is firm and stable, Yin and Yang.  When you push on the arm of an experienced Tai Chi player the arm will not collapse (unless the paractitioner wants it to) instead you will feel Peng, the arm will hold it’s shape but the muscles will not be tense, you may even feel as though you are pushing against the ground and the practitioner can re-direct  your force by simply turning the waist or using whole body movement. This may not make sense unless you have felt it.  An example of Peng may be that when you are grocery shopping and you are pushing your cart your arms connect to the cart. Your arms maintain their shape and are relaxed, the cart moves forward as you step. Here you are getting your energy from the ground, your whole body moves and so you are “pushing” the cart but not necessarily with your arms they are merely holding a shape to connect you to the cart, from the gound. When we push in Tai Chi we use this principle. So as we use the other energies, Roll back for instance, even though we are yeilding and re-directing an incoming force with relaxed technique we still have our structure, Peng.  This article is meant to inform and not mislead, relaxed IS relaxed, don’t think of Peng as being tense or using muscular force. When you touch the surface of a balloon it merely holds it’s shape unless you press into it then it returns your energy or bounces you out. If you’ve ever been lucky enough to push on a master then this has probably happened to you, or perhaps you’ve seen it happen. In constrast  there is a fine line between relaxation and not being present. As Tai Chi practitioners we must remain “present” when we contact our opponent but without issuing or giving force.  These are subtleties that we can talk or write about all day, but only by feeling an experienced practitioner or teacher can you understand this very important energy. It is listed first because it should be present throughout your Tai Chi form, Push Hands, and applications.